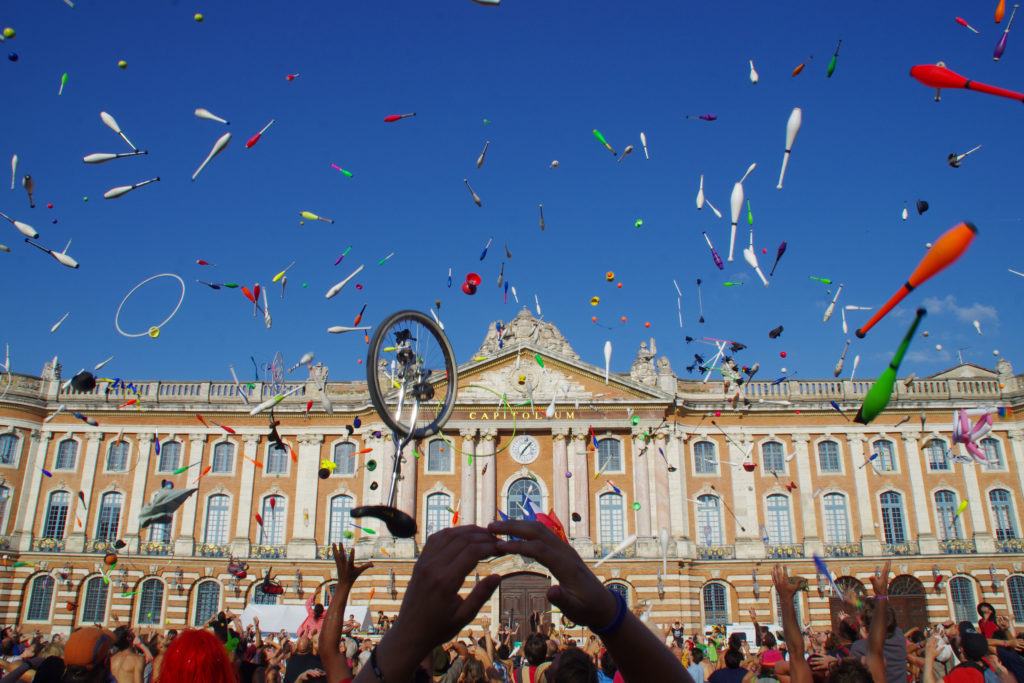 The European Juggling Convention or EJC  is the biggest not-for-profit juggling event in the world. The convention attracts some of the best jugglers, acrobats, stage and fire performers from around the globe, as well as scores of enthusiasts or those who are simply curious.

In 1978, the first European Juggling Convention was held as a small two-days gathering of eleven jugglers who met to share their joy of juggling. Since these humble beginnings, the EJC has grown to become the world’s largest juggling festival that regularly attracts thousands of people for nine days filled with top-class shows, comprehensive workshops for all levels, juggling in all its embodiments and a unique atmosphere. For all these apparent changes, EJC still holds true to its very principle: The European Juggling Convention is a festival from jugglers, for jugglers.

There is no fixed location for the EJC, in fact, each year it moves to a new location in Europe as to help spread the awareness and joy of juggling and contemporary circus to new audiences. The number of participants varies a lot, from just over 1100 people for some of the most remote locations to over 7400 participants for conventions in central Europe. The decision where the EJC goes next is taken by the attending jugglers of an EJC at the EJA General Assembly. A new organizing team is elected typically two years in advance to give the team enough time for preparation

Over the last decade, the EJCs have grown much bigger in the number of participants and scope. This automatically leads to more expectation and pressure on the local organising team – which is a big challenge for both EJC organisers and EJA. Thus, timely preparations and a good relationship between EJA and EJC team are critical. As a result, a more strict approach to selecting future EJC candidates has been adopted.

Read here for more information on the application process.

The EJC is run “from jugglers, for jugglers” by non-profit organisations made of hard working volunteer jugglers from the host city. As a result, each convention gets its own special character!

The European Juggling Association and voluntary helpers from many countries support the local organizers to run this event.

With over 40 years of history there is a wealth of events to look forward to.

The colourful Parade though the host city, Open Stages and Special Shows, Games, Combat and Volleclub Tournament are all parts of the programme.  For the night owls are the Irish parties and themed Renegades. All culminating in the spectacular Gala show, the creme de la creme of stage performance.

A convention in spirit

The EJC is, as the name suggest, a convention first and foremost. It is a meeting place for old and new friends, a forum for exchanging techniques and ideas. The majority of the participants’ time is spent on workshops, trick share and yes! practice. The training facilities are open around the clock and are being heavily used at any point of day or night!

Modern circus at its best

The participants of the convention represent a variety of performance styles and props. From balls and club juggling, hats and hoops and aerial acrobatics, to flow-arts and fire spinning, cyrwheels, stilt walking and unicycles.

The convention is a perfect place to see or try any technique or prop there is.